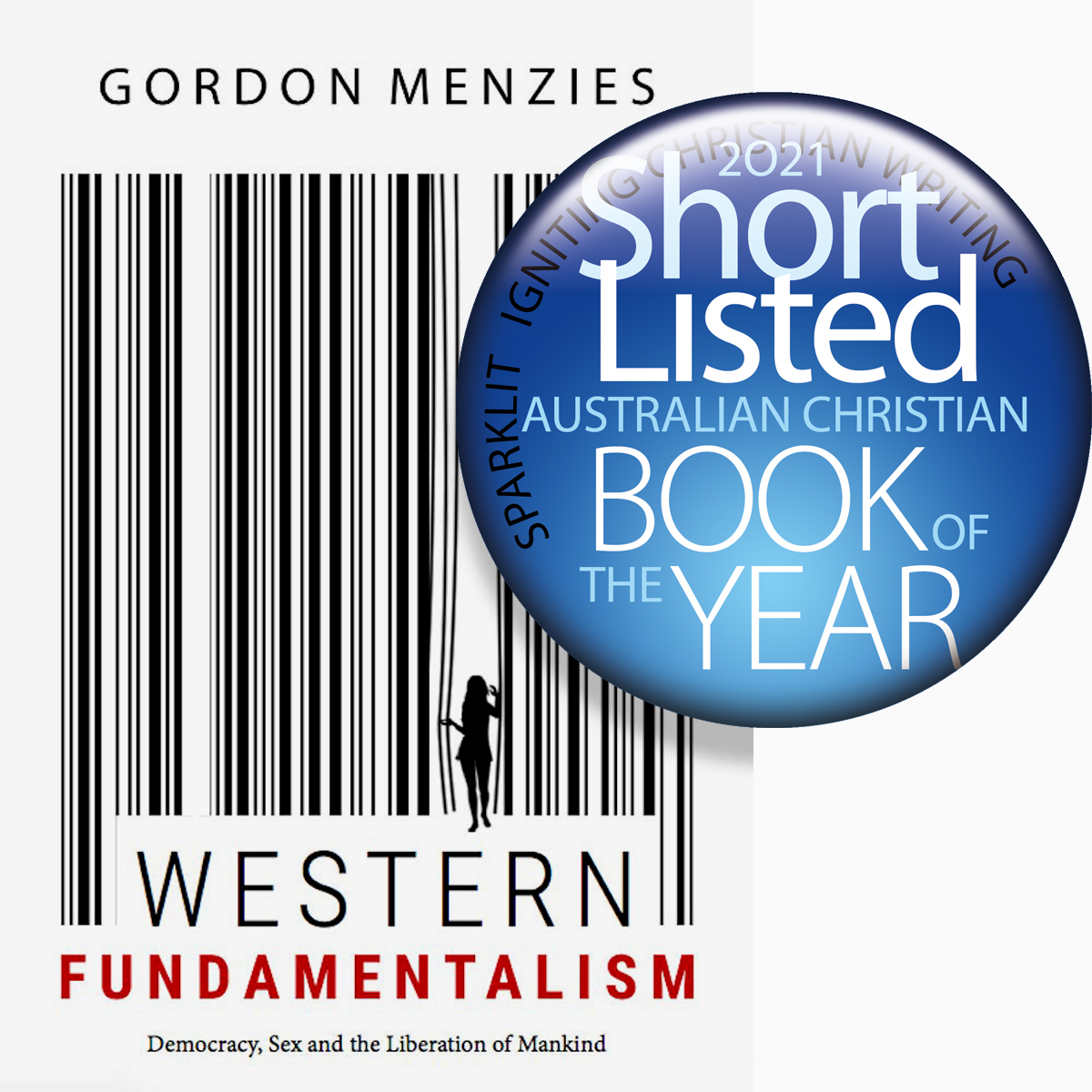 LEWIS JONES* finds that Gordon Menzies’ book, Western Fundamentalism, takes us on a journey worth taking

During World War II, Prime Minister Robert Gordon Menzies gave weekly radio addresses to the nation outlining how the west, in general, and Australia, in particular, needed to grow and respond to the challenges the war had created. He believed the future could not be left to a default reaction to the ravages of war and a reclaiming of past glories, but rather a new, grand political vision needed to be consciously pursued. Week after week, he led the Australian people through the philosophy of John Stuart Mill, the political theory of John Locke and the economic theory of Adam Smith as he set out his vision for western liberal democracy and a new world order.

In Western Fundamentalism, 80 years later, Menzies’ namesake, Associate Professor Gordon Menzies, turns the spotlight on the resulting western world order to uncover the unspoken fundamentals that lie at the core.  Where has the great experiment landed?  Like the point, line, and plane of geometry or the order and intelligibility of nature in science, the denizens of western liberal democracy all share a common set of presuppositions, or core axioms, about ourselves and our world that shape our thinking and ethical intuitions.

Menzies wants to take the reader on a journey out of themselves, at least a little way, so that they can look back to try to understand themselves a little bit better and have a little more sympathy for the way others might see them.  In order to get us on the train, however, we need to accept that we are fundamentalists, not of the kind described above, but “someone who bases the way they live and see life on key beliefs (i.e. fundamentals) that cannot be proved”.  This is an inclusive definition rather than one simply masking anti-religious sentiment.  This definition shifts the interesting question from who is in or out to this: “What are your fundamentals?” “What are their implications?”  Everyone, if they are honest, can engage in that discussion, not only about others, but about themselves as well.

The aim of the book is not to evaluate western liberal democracy (though you will be challenged), but to acknowledge its fundamentals and bring them into the light, so that we can better understand ourselves, the way we think, how we reason, and more calmly and confidently interact with others, both those who share the same set of presuppositions and those who hold to others.  Menzies encourages us: Those who can make that journey out of themselves will return with a rare gift to future conversations – “the gift of being able to succinctly describe what is non-negotiable about your position and the humility to admit what you cannot yet resolve”.

The book is conversational and a work of apologetics as Menzies seeks to persuade us of the value of the exercise in the first place and, throughout, as he reveals his own biases in an attempt to reassure us that he is not smuggling unspoken assumptions into his analysis.  We’ve done a bit of reflecting on culture here lately, as well as how to have healthy conversations, so it seemed worth highlighting a recent book that helps us do both.

Given a head start from his experiences at the Oxford Union debating society while studying for his Doctorate in Economics, Menzies ultimately identifies democracy, free market liberalism, and sexual freedom as the three pillars of Western fundamentalism.

With helpful examples from history and engaging thought experiments, Western Fundamentalism probes our deepest held beliefs about what cannot be shaken – and shakes it, just a little, just enough to help us admit that they are beliefs, that they’ve come from somewhere, that they don’t always generate the outcomes we assume they will and for which we defend them, and that separating ourselves, at least intellectually, from our beliefs allows us to reflect on them and discuss them without feeling judged or defensive.

For example, we could imagine that one key principle of democracy is that it taps into the wisdom of crowds along the lines of Condorcet’s jury theorem. “Suppose every individual in society has a 70% chance of supporting a brilliant research project which can cure cancer. If you randomly pick just one person – a ‘dictator’ –  there is a 70% chance the project will be supported.  But if you randomly select three people and get them to vote on this, the chance rises up to just under 80%. Inclusive decision-making taps into the wisdom of crowds.”

Hooray for democracy! The problem is, of course, as Menzies goes on to say, the maths works just as well for mistakes and lies.  What if 70% of the crowd supports the immolation of widows? Consider all the democratic societies your high school curriculum condemned as backward and consigned to the dustbin of history with a “good riddance”. Were their crowds wise? Why do you expect your crowd is? The EU is facing a crisis of competing crowds right now with Poland banning almost all abortion and the EU, in response, enacting a mechanism to cut funding to member states who don’t “respect the rule of law — which includes democratic values, human rights and the independence of the judiciary.”  The real question for the EU is not whether they cut funding to Poland, but do they believe in democracy and, if so, which crowds get to express their wisdom.

Turning to free market liberalism, Menzies interrogates propositions such as “Your wage equals your worth” or “Everything should be for sale”. Through his recounting of his holiday work selling Commonwealth Games key rings, we discover the power of prices in the market and ask is greed, therefore, good? We are introduced to the Israeli daycare centre that began fining parents for being late to collect their children, but then have to face the question of what happens when we translate a problem from the moral sphere into the economic sphere.  Does everything really have a price?  Should everything have a price?

Turning to the third pillar, sexual freedom, Menzies asks what happens when you put a price on relationshionships.  As he traces the rise of sexual freedom — the deregulation of marriage and the commodification of relationships — he arrives at what might seem a surprising conclusion. “Despite its popularity on the Left side of politics, [sexual freedom] actually looks very much like a triumph of neoliberalism.”

Our three pillars have something in common; “the importance of individual choice as a means of obtaining freedom – choice in voting, choice as a consumer, and choice of a sexual partner.”  Menzies then goes on to ask: What is the nature of the freedom for which we long?  Is it freedom from or freedom for?  Is it absolute autonomy we seek where we determine what we do and also why we do it or is there a givenness about humanity that means freedom is good, but that it is for something?

Menzies does a brilliant job of highlighting where stopping at freedom from has gotten us in our current cultural landscape and equally the dangers of assigning the wrong endpoint to freedom for. He points out how the removal of big picture stories or meta-narratives from our collective thinking during the rise of Postmodernism has left us without any guidance on the question of what we’re for.  In fact, to say we know constitutes a claim to power, or even an act of violence, and must be resisted, but we do know, because the Bible is perfectly clear on these very points, and, therefore, we have the truly liberating message to offer the world.

As the book of Exodus opens, we are confronted with God’s people in slavery to Pharaoh.  At the end of the book, God’s people are worshipping God at Mt Sinai through the newly-constructed tabernacle and newly-appointed priesthood.  Exodus is the story of God’s great rescue of his people from Egypt.  At least, that’s what it says in our English Bibles. In Hebrew, of course, the word translated ‘slavery’ is the word ‘service’ and the word translated ‘worship’ is the word, you guessed it, ‘service’. That is, God’s people are not set free from serving Pharaoh to create their own future. They are set free from serving the wrong king for the purpose of serving the true king.  Freedom from is essential, but it is not the end of the story. Our freedom is for something, as well.

“You, my brothers, were called to be free. But do not use your freedom to indulge the sinful nature; rather, serve one another in love.” (Galatians 5:13)

There is plenty more analysis in the book and this is only a teaser.  Whether you judge Menzies to have achieved his aim of taking us on that short journey a little outside of ourselves, we need to agree it’s a journey worth taking.  One of the things we need more than ever is an awareness of and a humility concerning those pillars that define our Western fundamentalist thinking.

In our attempts as Christians, for the sake of the gospel, to cross national cultures, political tribes, and even different generations in our communities, we’ll find the way is not very clear if we are always high-minded and defensive about our own culture. Even the smartest navigation software can’t tell you how to get where you want to go, if it doesn’t know where you are right now, so, as we seek to bridge gaps of culture and morals and politics in our increasingly globalised and polarised world, we need to know where we are before we can constructively reach out to others.

* Lewis Jones is a member of the Gospel, Society and Culture committee. He ministers on university campuses with AFES, leading the Simeon Network, a network of Christians working in academia. He holds a PhD in astrophysics and a degree in theology from Moore Theological College. He is married to Jenny, has three children, and is a member of Randwick Presbyterian Church.